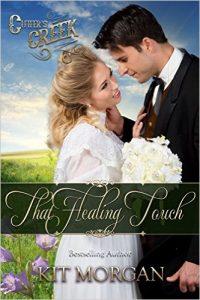 Jack Carlson spied for the union army for four, long years and what did he get for his trouble? Blindness. Battered by the war and lost without his sight, he seeks refuge in Cutter’s Creek, Montana. There he hopes to heal his bitter heart. But he’s going to need a lot more help than what he can come up with. His cousin, the local preacher, thinks so too and sends off for a mail-order bride for him, praying a wife will do the trick.
Willow Bennett has been in love with the same man all her life. As a young girl she followed Jack Carlson and his friends until they managed to out run her. As a young woman…well, a girl can dream, can’t she? Imagine her surprise when she becomes a mail-order bride and discovers Jack is her intended! That’s not the only surprise she gets in this story of forgiveness, hope and love.
That Healing Touch is the first book in a new series written by multiple authors. Enjoy these introductory novellas of sweet historical western romance, and get to know the folks in Cutter’s Creek, Montana! 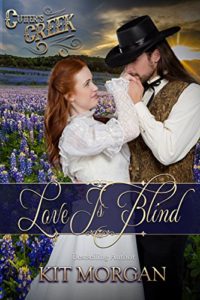 Lucius Judrow was good at his job, maybe too good. Hired by Jack Carlson of Cutter’s Creek to track down and retrieve his sister Emma, Lucius got more than he bargained for. The free-spirited Emma wasn’t what he expected, nor was the family she’d taken refuge with.

Emma Carlson, in hiding from her brother so she could marry a man of her own choosing, kept a watchful eye on those that passed through White’s Stage Stop in case one struck her fancy. And lo and behold, one did! He was handsome. He was strong. He was mysterious! He was also sent by her brother Jack to find her! (So much for romance.) And if the tall, dark, devilishly handsome Mr. Judrow thought he could take her back to her brother, well, he had another think coming!

Kit Morgan’s second installment in the Cutter’s Creek Series, Love is Blind is the story readers have been waiting for! These sweet, clean, wholesome stories are a delight to read! Mail-Order Brides, western settings and the town of Cutter’s Creek make them special. Enjoy Emma and Mr. Judrow’s story! 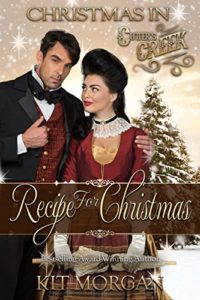 Eldon Judrow searched for his brother Lucius for years, during which, he just happen to strike it rich. Imagine Lucius’s surprise when Eldon shows up in Cutter’s Creek! But even though Eldon’s bank account makes it appear he has everything a man could want, his brother has something far more precious. A wife. Can Eldon find the same happiness? After all, the pickings in Cutter’s Creek aren’t just slim, they’re practically non-existent!

Agatha Shrewsbury has lived with the Bridger family for five long grueling years. More a slave than a member of the family, she finally reaches the breaking point. Will she ever know happiness? Or only toil and ridicule at the hands of her “keepers”?

A lonely man, a desperate woman, one Christmas festival, a mean-spirited family, and one … well, you’ll find out. Mix them together and you have a Recipe for Christmas! Enjoy this clean and wholesome, sweet historical, holiday romance! 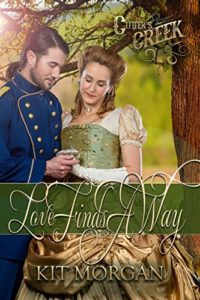 Bartholomew Brown had been a successful business man in his day, a very fine one. But after serving in the war, he sold his business and ran off with his father and brother to mine gold, even though they were years late to the gold rush. But, they had to give it a try. After all, what did they have to lose? Unfortunately, Bart lost plenty. But he did gain a friend.

Elizabeth Cornell dreamed of going on a grand adventure one day. Her husband had been a tailor, and they set out west with their dreams and everything needed to make a new life. Too bad her husband died on the way. Heartbroken yet determined, she forged on and settled in Cutter’s Creek Montana, where dreams really can come true …

Merritt Petroff is staring spinsterhood in the face, that is until a stranger shows up in town. Problem is, her matchmaking grandparents (not to mention the rest of the town) can’t leave well enough alone. Wouldn’t it be better if they let nature take its course? Not when there’s a living, breathing man of marriageable age in Cutter’s Creek they deem perfect for Merritt. Much to Merritt’s dismay …

Rafe Trent didn’t intend to stay in Cutter’s Creek. In fact it would be best for all concerned if he didn’t. But there was something about the little town, not to mention the townsfolk, the brought to mind a life he could only dream of. After all, a dream is all a wanted man could hope for.

Enjoy this clean and wholesome tale of two dreamers with the promise of love. This is a sweet, clean historical western romance.