Sheriff Clayton Riley asked for a pair of boots for Christmas, not a mail order bride! Unfortunately for Clayton, his brother and mother figured a bride would look better on him than a new pair of boots! After all, he’d been sulking around long enough after the death of his wife, and his family decided it was time to take matters into their own hands and see to it Clayton had a very merry Christmas!

Summer James was young, she was beautiful and, an impoverished orphan. Who would want such a woman? One who’d spent her entire life in an orphanage? Obviously no one. For here she was, eighteen and now of age to set out on her own. But New Orleans was full of men with evil intent for one such as herself, and she saw no other choice but to take the only offer for survival she could find and become a mail order bride. What she didn’t count on was becoming Sheriff Clayton Riley’s Christmas present!

Sheriff Spencer Riley and his mother recently ordered his big brother Clayton a mail order bride for Christmas! (The Christmas Mail Order Bride, Holiday Mail Order Brides, Book One). Too bad neither one of them told Clayton! Imagine Clayton’s surprise, and Spencer thought it to be one of the funniest things ever…until it happened to him! “After all,” his mother told him. “If Clayton can have a mail order bride for Christmas, why can’t you have one for New Year’s?” So much for the annual scarf and mitten set she usually got for him this time of year! Just what sort of mail order bride was HE going to get?

Elle Barstow spent most of her life at Winslow’s Orphanage but now it was time to leave and either find a job (of which there were none) become a mail order bride, or take to the streets of New Orleans and hope for the best. Becoming a mail order bride looked like the safest option, but Elle soon learned things don’t always go as planned. Unwittingly involved in a horrendous encounter before she leaves New Orleans, Elle can’t possibly marry her future husband when she doesn’t know if she’s considered guilty of murder! She figures her only chance is to avoid the law, not to mention her future husband, until she finds out what really happened. Easier said than done. Her future husband IS the law! 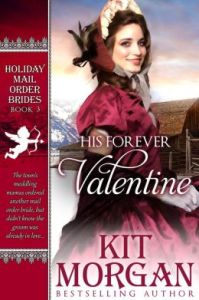 Enjoy this third installment of the Holiday Mail Order Brides, as Kit Morgan delivers another delightful romp of sweet romance in the old west!What happens when meddling mothers order their sons mail order brides and not tell them? It happened to Clayton Riley, it happened to his brother Spencer, and now it’s Matthew Quinn’s turn. There was just one, little, problem. He was already in love …Rose Smith didn’t know what to expect when she signed on the dotted line at the Ridgley Mail Order Bride Service, all she knew was that adventure awaited her in the wild west! And what an adventure she got when she showed up in the town of Nowhere! 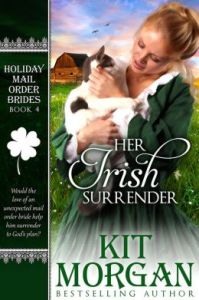 Adaline Dermont had a dilemma. She was losing the home she and her aunt had lived in for the last seven years. Their money embezzled away by a crooked solicitor, Adaline must either become a mail order bride, or face the cruel streets of New Orleans. Her aunt had someplace to go, Adaline didn’t. Mrs. Ridgley’s Mail Order Bride Service looked like her only hope.

Lorcan Brody didn’t have a dilemma, but he did have an overweight cat, a mother with a fierce Irish temper, and a best friend who got him into more scrapes than Lorcan could count. And one thing he didn’t count on, was his parents’ sending away for a mail order bride! Getting married was the last thing on his mind, and he let everyone know it, including the bride!

Find out what happens when two people think the thing that won’t work, turns out to be the thing God had in mind all along …

Arlan Weaver had often thought of getting himself a mail order bride, but now that he had, he wasn’t sure the pretty little thing The Ridgley Mail Order Brides Service sent him was going to be tough enough to handle farm life, let alone his brothers. But Arlan soon found his new little wife was chock full of surprises. In more ways than one.

Samantha Carson had never considered becoming a mail order bride. She was to marry as soon as she turned eighteen and thus be out of her uncle’s hair not to mention his house. But her uncle had other plans, and wanted Samantha for himself. When she found out his intentions, she ran to the only mail order bride service she knew of, and begged Mrs. Ridgley to send her somewhere, ANYWHERE that would get her away from her lecherous uncle. And so, Mrs. Ridgley sent her to Nowhere. 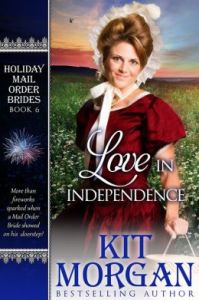 Winnie Longfellow has spent years caring for her sick mother, and now that she’s passed, has nowhere to go but her Aunt Eugina’s. But her aunt has other things on her mind, other problems to deal with, and so Winnie accepts a proposal from a pastor out west looking for a mail order bride. Little did she know, he was looking for so much more, anything more! He had no idea he’d sent for one! Now Winnie finds herself at the mercy of three madcap matrons, determined love will find a way. Despite multiple misunderstandings, a horrid bully/gossip, and a woman she’s sure her intended will marry instead of her, Winnie not only discovers a few things about herself, but that love really does find its way … 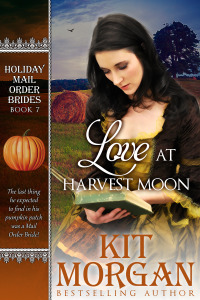 Eva Brock’s mother was the most over-bearing, controlling, and opinionated woman she had ever known, and if she didn’t escape out from under her roof, she’d have Eva married off to a man not twice, but THREE times her age! Her only hope was to become a mail-order bride and marry herself off before her mother did.

Finn Mullany wasn’t looking for a wife, and didn’t want one. Or rather, he didn’t deserve one! He’d made some mistakes of late that cost his best friend his sight, and Finn was having a pretty hard time dealing with the aftermath. But what he didn’t know, was that sometimes forgiveness comes in many forms, and many ways, and Lorcan Brody, Finn’s best friend found a way to show him he’d forgiven Finn completely. But would the love of a mail-order bride be enough to help Finn forgive himself? 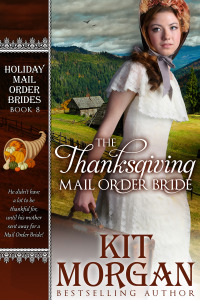 It’s time to return to the town of Independence for another hilarious romp!

Mercy, Martha and Maude are at it again! Not only has Martha Tindle sent away for a mail-order bride for her son Morgan without telling him, but her cantankerous sister Eunice is coming to town for a visit! The three matchmaking meddlers are beside themselves when things don’t go as planned, and poor Martha is not only stuck with a son who doesn’t want a bride, but a sister who has other ideas of whom he should marry. Then there’s the bride herself … one Daisy Evers, a woman with a secret she hopes to keep hidden, whether she marries or not! 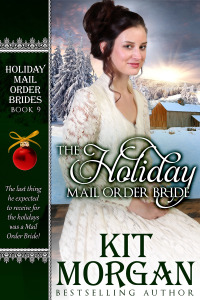 Ambrosia Winters and her father are in trouble, BIG trouble. If Ambrosia doesn’t consent to marry her father’s crooked business partner, Reginald Van Cleet, he’ll slap false charges on her father, and bring him to complete ruin if not worse. To escape the madman, Cecil Winters will do anything to save his daughter from suffering such a horrible fate. But what?

Garrett Vander wasn’t expecting a mail-order bride, but that’s exactly what he got. Worse, no one in town even knew who sent for her! But who was he to argue? She was beautiful, kind, but also brought something with her no one expected. Her father! Now why would she do that? There was more to his mail-order bride than she let on, and Garrett was determined to find out what. Or he wasn’t about to marry her. 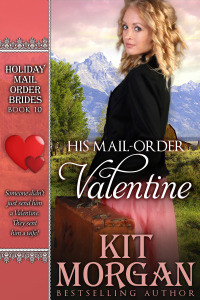 Someone in Independence is sending off for mail-order brides and they’ve struck again! This time Julian Smythe is the culprit’s latest victim, and naturally, he hasn’t a clue. Throw in the antics of Mercy, Martha, Maude, and their newest partner in crime, Mahulda, and you’ve got enough chaos to drive any mail-order bride crazy. And that’s exactly what the four matrons do! Ellie Sampson came to Independence to get married, but no sooner does she get off the stage, she’s snatched up by the four and thrown into the position of a maid in the Vander household! Shocked to discover her husband-to-be had no idea she was coming, she’s even more shocked to discover she’s falling in love with not only him, but the town as well. But a secret she holds could bring everything tumbling down, and any chance at happiness would be gone in an instant. What should Ellie do? 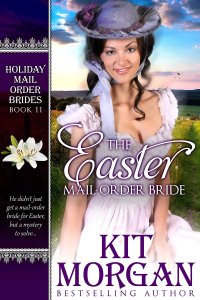 The mystery matchmaker has struck again! Independence was a quiet little town, until the antics of Mercy, Martha and Maude brought a mail-order bride last summer for their unsuspecting pastor. Now, four mail-order brides later, the town is about to get another, only this bride, (not to mention three out of the previous four) were sent for by a mystery matchmaker! This time Jess Templeton is the unsuspecting groom, and chaos erupts when his bride arrives. Now the whole town is in an uproar (thanks to Jess’s mother) and the hunt for the “mad matchmaker” begins! Can Jess and his bride Sarah’s romance blossom during such chaos? Or will his mother have her way and make sure Sarah is sent right back where she came from? Discover along with the rest of the townsfolk what happens in this light-hearted romp full of mystery, romance, and a few surprises! 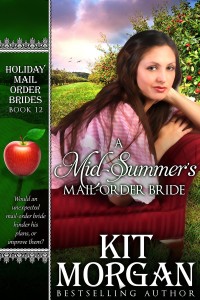 Bernice Caulder has been unlucky in love for as long as she can remember, and now that she was a mail-order bride, she wondered if her bad luck didn’t follow her from her home town of Independence, Oregon all the way to Nowhere. a tiny speck of a town in the Washington territory. Why else would her husband-to-be be having such a hard time making up his mind about her?

Warren Johnson had his life all planned out, and it didn’t involve a wife any time soon. But when his grandfather ups and orders him a mail-order bride (not to mention fails to tell Warren about it) his life is turned upside down. He didn’t want a wife, didn’t plan on a wife, and by golly, he was going to make sure he stuck to his life’s schedule! But did fate have other plans?

The Weaver clan was growing. Not only was Arlan, Ma Weaver’s oldest son and his wife about to have a baby, but Benjamin, one of her identical twins, was about to get his very own mail-order bride! Ma Weaver couldn’t be happier! Sure, Benjamin and his brothers had been sheltered in the small valley where they lived most of their lives, and maybe they didn’t live as fancy as some folks. But they still lived well, and Ma Weaver was determined her sons would marry well too.

Charity Cross discovers just that when she becomes Benjamin’s mail-order bride and is introduced to the Weaver farm. But what the Weavers don’t know is that Charity has a secret, something with the power to tear them apart if she isn’t careful. The problem is, she has no idea how or what “careful” looks like. Not after what she’s been through …