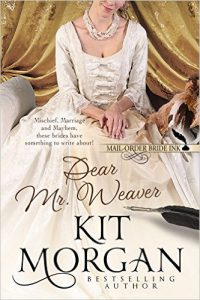 Mail-Order Bride Ink! Mischief, Marriage and Mayhem, these brides have something to write about! Mrs. Pettigrew, of the Pettigrew Mail-Order Bride Agency sees to that! She likes to hear from all her brides and loves a happy ending. But to ensure her brides get one, she does things to help love along. Sometimes, however, those things don’t always go as planned…

I’ve reached my destination and I must say that the Washington territory is not what I expected, neither is my new husband for that matter. His family is huge, loud and boisterous! We haven’t had a moment’s peace since our wedding. I don’t mean to complain, but I wasn’t prepared to become a schoolteacher for seven children! Seven mischievous, prank-pulling, children no less. No, they are not my husband’s, (thank heaven). They belong to his older brother and his wife. In short, I should have been warned! He said nothing in his letters about any of this. I don’t know how much longer I can endure it. Please write back to me as soon as you can before I go mad!

Daniel Weaver was ready for a wife. His three older brothers had been married for several years and now it was his turn. So, like his brothers Arlan, Benjamin and Calvin, he sends for a mail-order bride, with a little help from their cousin Matthew of course. After all, he helped his brothers write their letters to their prospective brides, so why not him? But when the letter from his bride comes, it’s got more than her acceptance of his proposal written in it. Worse, it gets picked up and read by the town’s worst gossip, Nellie Davis.

Ebba Knudson can’t figure out why folks in her intended’s town of Nowhere would be giving her such odd looks. It was bad enough she had other things to deal with by coming to the Washington territory to marry a farmer, but now this? Was there something wrong with her future husband? Or just with her? Of which she knew there was plenty. Enough to make her think she might not get married at all…

Enjoy this sweet, historical, western romance and the first book in this laugh out loud new series! 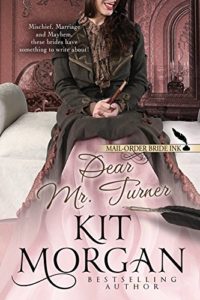 Mail-Order Bride Ink! Mischief, Marriage and Mayhem, these brides have something to write about! Mrs. Pettigrew, of the Pettigrew Mail-Order Bride Agency sees to that! She likes to hear from all her brides and loves a happy ending. But to ensure her brides get one, she does things to help love along. Sometimes, however, those things don’t always go as planned… Dear Mrs. Pettigrew, I made it to Clear Creek without incident. Unfortunately, my intended was unable to meet me at the stage as he was otherwise engaged in being shot at by bloodthirsty outlaws! He, of course, was shooting in return, but that’s not the sort of excuse a bride wants to be told! I hope I made the right decision in coming here. My life as a Southern Belle of Savannah is quickly fading, my hope with it. I don’t know if I’m the right sort of bride for this Eli Turner. He’s everything a southern gentleman is not. I’m everything a woman of Clear Creek is not! Are you sure this is going to work? Speaking of work, the women here expect me to do a lot of it. I knew there would be some involved, but I had no idea life on the prairie could be so hard. I did, however, manage to bake my first pie without burning it, or the house down, with it. A small achievement and I hope the first of many. I’ll need many more to survive this place! IF I survive … Write me as soon as you can! Sincerely, Pleasant Comfort Eli Turner’s older brother Tom had been happily married for the last six years and had a couple of children to boot. Now it was Eli’s turn, but was he ready? He was just a simple deputy after all with an even simpler house to call home. What did he have to offer a bride? Especially the one he got! His mail-order bride wasn’t anything like he expected and probably wouldn’t survive life out west. What’s a man to do with a swooning female? Pleasant Comfort hadn’t planned on getting married, least of all to a man she had no say about. So when her father tries to marry her off to the despicable Rupert Jerney just to save himself from financial ruin, she does what any self-respecting Souther Belle of Savannah would do. She hightails it out of Georgia! But doing so as a mail-order bride might not have been her first choice.She wasn’t made for roughing it without servants, a cook, and six older brothers to look out for her. What’s a Southern Belle to do when the women of Clear Creek get a hold of her and have other ideas? 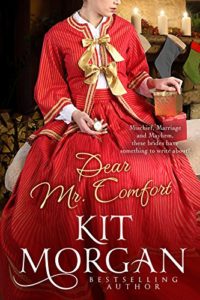 My name is Major Comfort and I am writing to you to clear up a matter of great importance. It seems a grave mistake has been made. A woman by the name of Lucretia Lynch arrived in town claiming to be my mail-order bride. The trouble is, I didn’t send for one!

My guess is my father is behind this. His name is Buford Comfort, and for some insane reason he thinks I should marry. Yesterday! Unfortunately, so does my so-called mail-order bride. She is determined to get me to the altar and to make matters worse, her father traveled with her, which only complicates the situation.

I’m not a drinking man, Mrs. Pettigrew, but I’m strongly considering taking it up! I implore you to write me post haste so we can get this straightened out as soon as possible!

Honoria Cooke always knew she wasn’t as refined a young lady as she ought to be. She loved the feel of the wind in her hair as she raced her horse across the prairie. She could climb a tree as well as any of her brothers or cousins, out run them too. But when Major Quincy Comfort caught her eye, she wondered if she was the sort of woman to ever catch his. Just when she began to think so and let her heart fly, the unthinkable happened …

Lucretia Lynch was beautiful, sophisticated, well-dressed and from the glorious South. What was not to like as far as a southern gentlemen such as Major Comfort and his brothers were concerned? Moreover, she showed up in Clear Creek as Major’s mail-order bride! He claimed it was a mistake, a whim of his father. But as the days wore on, Honoria noticed him taking more and more interest in Miss Lynch which could only lead to the inevitable. What had she been thinking? How could she possible compete with the likes of a true Southern Belle? She couldn’t.

Enjoy this sweet, clean historical western romance set in the whimsical town of Clear Creek. Where anything can happen, and usually does!

Sophie Baxter had been passed from relative to relative after her parents died. Eventually, said relatives passed on too, leaving Sophie no choice but become a mail-order bride. But in Sophie’s case, she looked forward to it. No more drudgery, no more taking care of sick relatives, watching them die, then doing it all over again with another set. No, this was progress! But when Sophie arrives in Independence, Oregon to finally meet her future husband, she gets more than she bargained for. A lot more!

Following in his father’s footsteps, Fletcher Vander took to practicing law like a duck takes to water. Too bad his methods were so frowned upon by his current employers. Worse, his unorthodox ways got him fired. With a stiff upper lip, he returns home to Independence, where the unthinkable has happened! Who’d have thought life in the tiny town would suddenly become so exciting? And in the midst of it all was a true damsel in distress. Maybe getting fired and forced to go home wasn’t going to be so bad after all …